“When I was in the fifth grade, I joined our local traveling team and have played ever since. My older siblings played baseball and softball, so I grew up at the ballparks and always wanted to play. Besides my family, Tyler Odle and Beloit Blaze were the biggest influence on my softball career. I have played for Tyler since I was in the fifth grade and would not be the player I am today without him,” said Loomis.

Building great relationships is something Loomis is good at. Whether it’s with teammates or classmates, Loomis has worked hard to have an impact on everyone around her.

“My teammates have become some of my closest friends over the years. I have built some great relationships with them and their families,” Loomis said. “I am the president of our National Honor Society chapter and secretary of Beloit High FFA. I am also a yearbook editor, and a member of different clubs like future med, science, history, chess and the SAFE program.”

Being part of programs like SAFE (Seatbelts Are For Everyone) allows Loomis to get out and meet more of her classmates.

As for what’s next academically, Loomis said she plans on attending college in the fall.

“My plans after graduation are to attend FHSU and major in medical diagnostic imaging,” Loomis said. “My plans this summer are to lifeguard and work on my family’s farm.”

Loomis said this season was fun even though she is the only senior on the team.

“I am the only senior and most of the varsity team that I have played with for many years graduated last year, so I am playing with a whole new group of girls. I was sad that we didn’t get to have a season last year, but I am enjoying the opportunity to get to play with some new girls this year,” said Loomis. 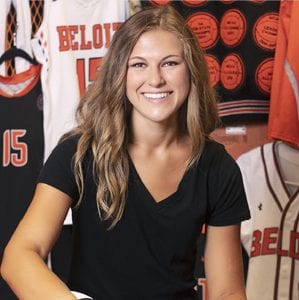