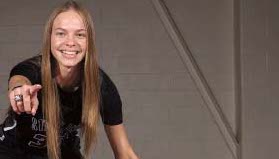 Kali Briar from Sterling was voted the Hog Wild Performance of the Month for April after she scored 12 points, on four three-pointers, for the Black Bears in their 47-38 2A championship victory over Garden Plain. While Briar was one of Sterling’s leading scorers this season, she does not view herself as a scorer first.

“I do work hard on my shooting game and take pride in that,” Briar said. “But my job as the point guard is to facilitate the floor and get the ball where it needs to be.” The Black Bears started slow against Garden Plain, but Briar said they never felt any sense of panic.

“We executed better as the game went along,” Briar said. “Once we gained the lead, we never got behind again and made big plays when we needed to.”

Briar said this season felt different than last season’s state title because of the bullseye on Sterling’s back. “We won last year and were ranked No. 1 all season,” Briar said. “That means everyone wants to beat you and give you their best. We had a big target on our back, but we stuck it out together and battled one game at a time.”