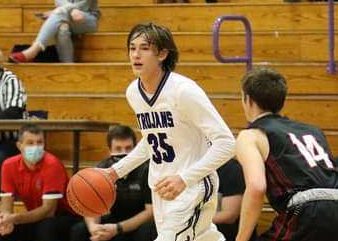 Eli Sawyers of Southeast of Saline was voted the Salina Area Preseason Boys Basketball Player of the Year. Sawyers received over 5,000 votes, which was more than 50 percent of the overall vote.

“For me it is a great honor to win preseason player of the year,” Sawyers said. “It does add some pressure, but I know that I can’t sit back and coast, I have to keep working.”

Last season, Sawyers was a first team all-league selection, where he averaged 14 points and seven rebounds per game, while shooting 53 percent from the floor.

The one area where Sawyers struggled was shooting from three-point range. He shot only 19 percent from deep last season, so needless to say, that was his focus during the offseason.

“I definitely want to improve my three-point shooting this year,” Sawyers said. “It was decent my freshman year, but last year it was not good. I’ve been working on that in the off-season so hopefully, it shows coming into this season.”

Basketball is the only sport Sawyers plays for Southeast of Saline, but he is the athletic representative for student council.

While majoring in pre-med or finance, Sawyers hopes to continue his basketball career in college after he graduates in 2023.