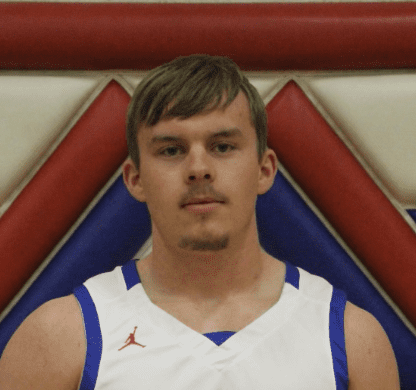 Senior Carter White plays football, basketball, and track for the Republic County Buffaloes, and he said he’s got quite a few goals this year for his final season on the basketball court.

“We really think we’ve got a good shot at state this year,” White said. “We’ve been the underdogs for the past few years, but now we should be one of the more experienced teams in 2A. We’ve built up a ton of chemistry and I am really excited to make a run this year.

“As far as individual goals, I hope to shoot about forty percent from three-point range,” he added. Coach Junker explains to all his players that they have a specific role on the team. My role is our shooter. I’ve put countless hours in at the gym lifting and shooting along with all my fellow teammates in order to achieve all our goals, and once again I am very excited to see all the hard work pay off.”

White is also aware that with his time in a Buffaloes jersey running out, he wants to make more than just an athletic impact in future seasons.

“I really love being in a leadership role,” he said. “I have been told by many that I am a natural born leader. I have been really into lifting my whole high school career, so I would say the biggest thing I do to encourage the younger guys on our team is show them the work ethic you need to be successful.”

In his free time, White said he enjoys lifting weights with his best friends Caleb Bates and Ryan Beavers, hunting, fishing, and spending time with family and friends. After high school he plans to serve his country as a United States Marine.