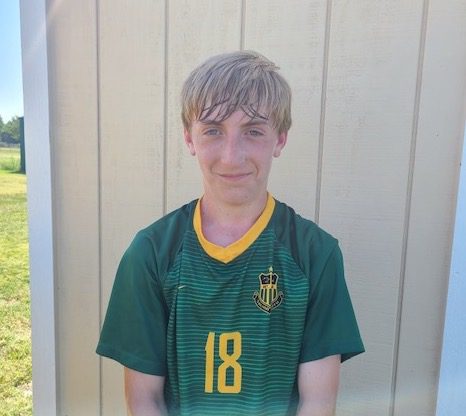 Bret Jones is a 14-year-old freshman for the Salina South soccer squad who plays midfield and outside back for the Cougars. He said he loves the game because of its fast paced and competitive nature.

“I fell in love with soccer when I was really young,” Jones said. I started playing at four or five years old and progressed from a YMCA team to a club team at eight years old.  Between the ages of eight and 13, many of the players on my team remained the same, allowing our team to grow and develop together.  I am grateful for all of my coaches and the experiences along the way, as they have made me into the player that I am today.

“I was super exited to finally transition to playing for Salina South High School,” Jones continued. “There are six players plus myself coming onto the high school team as freshmen that I have played with for many years which made the transition really easy.”

In his free time, Jones said he likes to go biking, hangout with friends, go on runs, and practice more soccer. He also enjoys going to Colorado and skiing, hiking, and mountain biking there.

As for the transition from YMCA soccer to being a freshman on a field of upperclassmen, Jones said that’s not something he has on his mind.

“My teammates have been a great help,” he said. “They coach me on the field, and I’m always watching them to see what I could do better.”