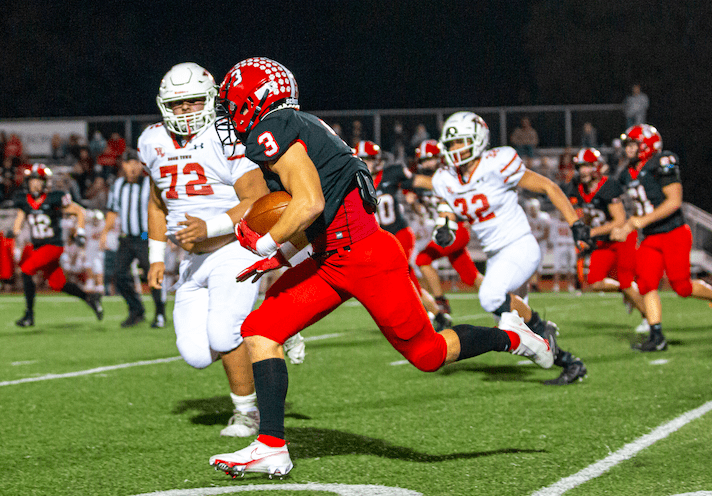 5A- Chase Smarsh of Bishop Carroll racked up 230 yards of offense as the Eagles knocked off Wichita Northwest.

4A- Jayden Sundgren of El Dorado ran for 116 yards and two scores in the Wildcats’ 36-0 shutout over Independence.

3A- Chapman’s Eli Riegel scored three times, while running for 213 yards in the Irish’s 24-22 victory over Sabetha.

2A- Landon Dye from Marion scored three times as the Warriors defeated Ell-Saline 26-7.

1A- Lance Hoffsommer of Sedgwick collected 301 yards, while scoring four times in the Cardinals’ 61-8 win over Sterling.

6A- Dylan Edwards of Derby scored three times while rushing for 292 yards in the Panthers’ 50-17 win over Newton.

4A- In Andover Central’s 21-19 victory over Buhler, Ashton Barkdull ran for 168 yards and two touchdowns.

3A-Luke Gebhardt of Southeast of Saline threw for 173 yards and rushed for 44 yards in the Trojans’ 36-6 victory over Beloit.

2A-Chaparral’s Jackson Schwartz had five receptions, 125 yards and a touchdown in the Roadrunners’ 22-14 victory over Trinity Catholic.