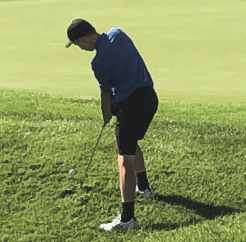 Two years ago at the 2A Tournament, Surface shot 83 and finished in a tie for 19th.

Surface’s goal this year is to consistently shoot under 78 and while he has not done that yet, he feels like his game is progressing.

“It has been decent but I could definitely score way better,” Surface said. “This spring has really taught me how to play in the wind because I don’t think we have had a practice under 20 mph. Hopefully it will calm down in the future.”

Surface also plays basketball, so last year he never got a chance to even practice with the golf team because he was at state basketball when sports were shut down.

“I did not hardly play last spring because I was at state basketball when sports got cancelled,” Surface said. “It stunk that we were not able to compete but it was an opportunity to get better.”

Surface would like to play either golf or basketball in college, but his preference would be to golf.