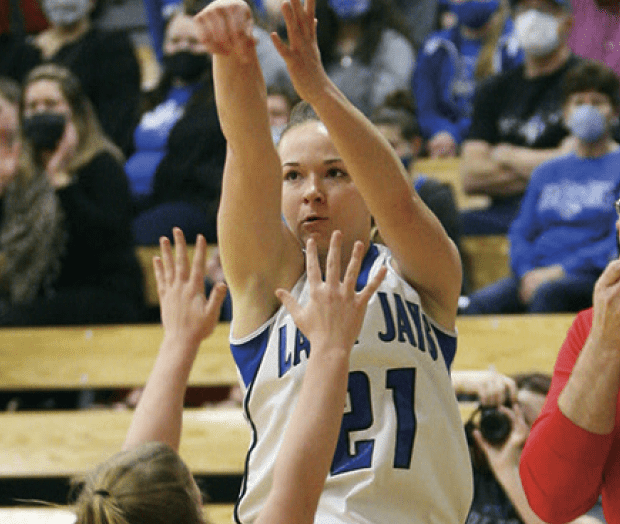 Lauryn Dubbert of St. John’s-Tipton was chosen as the Hog Wild Performance of the Month after recording 26 points, nine steals and four assists in the Blue Jays’ 52-40 victory over Wetmore in the 1A DII quarterfinals.

“The biggest thing I had going for me was my aggressiveness,” Dubbert said. “I was playing hard on defense the whole game to get steals and eventual transition shots. I hit a couple three-pointers early on that put a spark in everyone. Also, what helped me was how well my teammates know my game. They always find me when I’m on a hot streak shooting or know when I want a ball screen.”

“All year we have had a very effective press that always causes teams trouble so we continued to push that the whole game which got us many steals and forced turnovers,” Dubbert said. “We also knew that they wanted us to slow the game down so we did the exact opposite by pushing the pace and eventually wearing them out.”

Advancing far in the state tournament was something Dubbert and the Blue Jays had talked about all season. To see that goal achieved was special.

“Our goal all year was to prove to people that we are a top team in the state and to make a run,” Dubbert said. “By being one of the last four teams, we have proved that.”