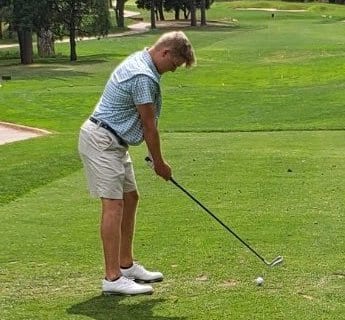 Kameron Shaw of Salina Sacred Heart was voted as the Salina Area Preseason Boys Golfer of the Year. Shaw received over 4,600 votes, which was over 51 percent of the overall vote.

“It means a lot to me to get this award,” Shaw said. “I’m hoping my play this year will reflect the honor.”

Shaw was the individual 2A state champion in 2019, shooting a six-under 66. He also led the Knights to the team title, which was their fifth straight.

“I’m super excited to get back and chase another state title,” Shaw said. “Last year was a rough way to end the year and not being able to have a season. I’m glad I’ll get an opportunity to make up for it this year.”

Winning another state title—both individual and team—is the primary goal for Shaw, but he also has a season-long goal, too.

“I want to win seven of the ten tournaments I play in,” Shaw said.

Shaw is also involved in Scholar’s Bowl and Science Olympiad at Sacred Heart and next year he is going to play golf at Nebraska and major in Engineering.