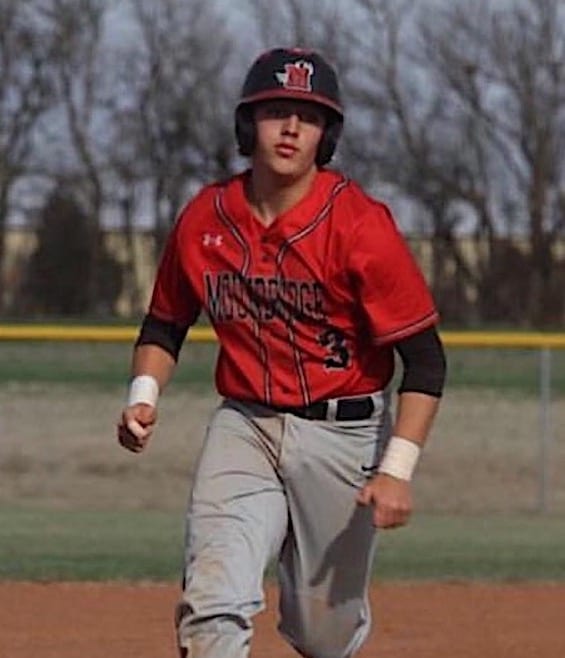 Moundridge High School senior Wyatt Falco has enjoyed a nice high school baseball career playing for the Wildcats. Despite missing last season due to the pandemic, Falco has continued to work and improve his game. This season, according to coach Jason Rains, Falco is likely to be voted in as one of the captains on the team.

“I love that our team is willing to learn and try our best,” said Falco. “Our expectations this season are to win games and break records.”

The Wildcats are young this year, but coach Rains is confident in his seniors like Falco.

“We have a very young team this year, but these four (Falco, Rains, Schlosser and Unruh), I believe will be the ones to watch. All are seniors with the exception of Ty Rains (Fr.), so they will be our leaders on the field. They will likely be bringing a foundation to our infield, pitching and the top part of the batting lineup,” said coach Rains.

Falco started his baseball journey when he was only four years old. Since stepping onto the field and swinging the bat for the first time, Falco has called baseball his sport of choice.

Over the years he’s made many memories on the field. One stands out amongst the many.

Falco said many people have helped him become the player he is today, including his father.

“The biggest influence has been my dad. He has pushed me to become the best player I can be,” said Falco.

Looking at the calendar, Falco said there is one game on the schedule that stands out to him. A game he is eager to play against a long-time rival.

“There is one game I’m stoked to play Inman High School this year because they are our rival,” said Falco.

With guys like Ty Rains, Jon Schlosser and Corbin Unruh on the roster, the game is destined to be a good one. Dawson Stucky is another player to watch for Moundridge. Stucky does a lot for the team and expects very little credit.

Once his final season of high school baseball has ended, Falco plans to take his talents to the next level and continue playing baseball for Bethany.

“My plans after I graduate are to play college baseball at Bethany College,” said Falco.

Becoming a Swede is another chapter in the baseball life of Wyatt Falco.