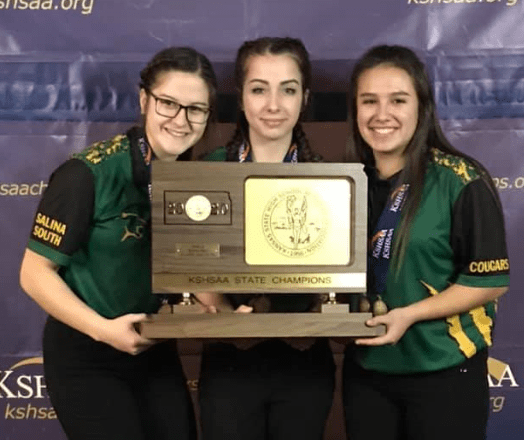 Nina Frees of Salina South was voted as the Salina Area Preseason Girls Bowler of the Year. Frees received over 5,000 votes, which was 99 percent of the overall vote.

“I hope being the most voted means that I am considered a leader on the Salina South girls bowling team,” Frees said. “And that all of the hard work I have put in during the offseason has been noticed.”

Frees and her teammates set the bar high last season as the Cougars won the 5-1A championship. Individually, Frees took 10th and she hopes to finish in the top five at state this year and be selected first team all-state.

“Both the boys and girls bowling teams are very strong with a lot of people returning and we have high hopes for the season,” Frees said. “We know teams are going to be looking at us as a threat to repeat.”

Frees also plays golf and softball at Salina South and while she is decorated in both golf and bowling with the Cougars, Frees wants to play softball in college.