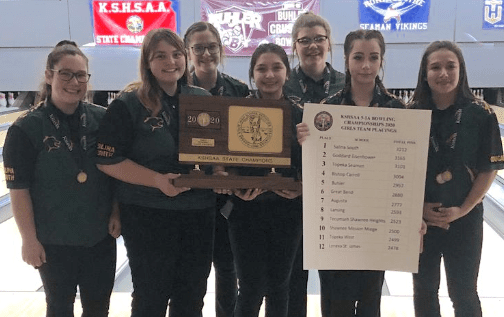 Salina Central is the defending 5-1A champion and the Mustangs have a strong 1-2 punch returning this year in Chase Young and Preston Miller. Young had the ninth best scoring average in the state and took seventh at the state tournament, while Miller had the 13th best average and took sixth at state.

Salina South took second at the 5-1A Tournament last year and returns two bowlers who will anchor the team this season. Griffin Peterson had the 10th best scoring average in the state a year ago and took 15th at state, while Andrew Froetschner took fifth at state.

McPherson lost half its team to graduation, but the Bullpups return Tytin Goebel, who had the third best average on the team.

Salina Sacred Heart brings back Markus White, while Zach Brown returns for Solomon. Both were one of the top averages respectively on their teams.

Salina South is the defending champion in 5-1A and the Cougars are loaded once again. Returning is Aviana Ordonez, who took second at state and had the 11th best scoring average in the state, Nina Frees, who took 10th at state, and Reba Guerra, who took 33rd at state.

McPherson has two state qualifiers returning this season in Heidi Allen, who took 22nd at state and Naomy Aguilar.

Salina Central lost its top two bowlers from last season, but the Mustangs do return Cheyenne O’Connor and Kensley Jones.