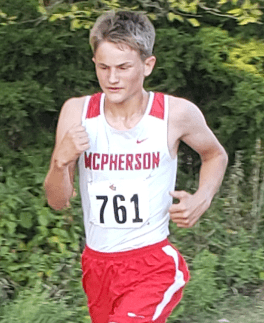 Brock is a sophomore at McPherson High School and a current member of the varsity wrestling team. He’s also a two-year letter winner in cross country, but his favorite sport is baseball where he plays catcher or utility. Unfortunately for many student-athletes spring sports were cut short due to the pandemic, including his freshman season of baseball. But Burgess and his teammates are hopeful they can return to competition this spring.

Like many other athletes, injuries can occur and some of them require physical therapy. Burgess suffered a bilateral hip flexor strain, which required physical therapy in order to return to competition. It was Advanced PT that helped him get back in the game.

Burgess had the dry needling which he said helped him recover. The therapists he worked with were great according to Burgess, especially Sara. He said she explained everything and made him very comfortable, so he wasn’t nervous at all.

Outside of sports, Burgess is involved in many activities including the FFA. He is a member of the McPherson High School FFA where he is currently the Treasurer. He is an active member of the Country Cousins 4H Club. Burgess has been in 4H since he was six years old.

His involvement in FFA has garnered him many awards such as the 2020 Kansas State Fair Grand Champion Holstein Cow and was awarded Premier Exhibitor. He was also the 2020 Reserve Grand Champion Showman at the Kansas All Breed’s Junior Dairy show.

Burgess owns and shows registered dairy cattle and meat goats. All while carrying a 3.5 GPA. His future goals include attending college to major in Agricultural with an emphasis in Animal Nutrition.