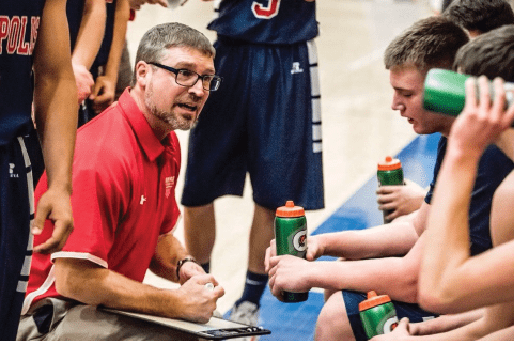 By Ember McElrath
John Darrow has been coaching basketball for the past 27 years, 21 of those years being at Minneapolis High School.
Coach Darrow loves seeing what he can get out of each of his players.
“Seeing kids become better basketball plays than they thought possible, hopefully that will help them in their lives beyond the court,” said coach Darrow.
Coach Darrow also enjoys the challenge of making a team that can not only win, but compete and win against teams that have better athletes than they do and are projected to win.
His love of coaching didn’t come by accident, but by blood. His father and Allen Sheets have been two of his most important mentors over the years. He not only got the opportunity to be coached by his father, but also got the pleasure of coaching against him.
“Allen Sheets is a person that I have always looked up to as a mentor, he seemed to always get the most out of his players and I always admired that about the way he coached,” said coach Darrow.
For this season coach Darrow is very optimistic.
“There is no doubt that we should be able to compete in every game that we play in, we have experience and athleticism coming back from last year,” coach Darrow said.
Coach considers himself the lucky one when it comes to having the pleasure of coaching both girls and boys at the school.
“The values that the parents have instilled in these kids align with my philosophy of raising kids,” said Darrow.
Congratulations to coach John Darrow for being named the Salina Regional Coach of the Month.