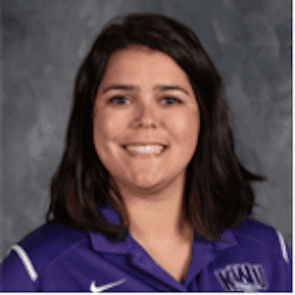 Alyssa Waldron, the softball coach at Salina Central, was chosen as the Salina Regional Coach of the Month for April.

Waldron, who spent the previous two years as a graduate assistant at Kansas Wesleyan, was going to be in her first year as the Mustangs coach.

This is her second year as an eighth grade English and Advanced English teacher in the Salina School District.

Waldron said it was difficult to not even begin the season.

“I just told them that it was heartbreaking that this had to happen,” Waldron said.  “And to my seniors, I told them that if they need me to do anything as far as talking to college coaches, I would, and I would try to get them in front of a college coach if COVID-19 blows over sometime soon.”

While the Mustangs were only able to practice for just a couple weeks, Waldron enjoyed her time with her team.

“I only have a few, but I would have to say just being out on the dirt with my coaching staff and players up to this point,” Waldron said.