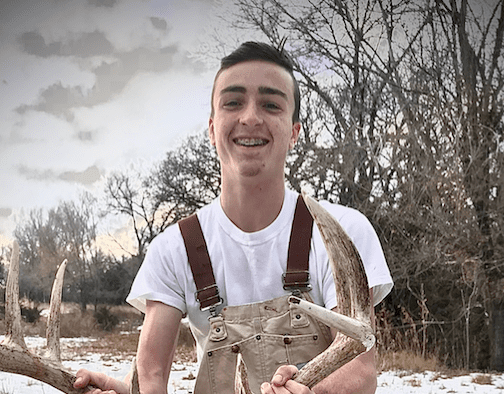 Duke Hilbert of Bennington was chosen as the recipient of the KDWP Call of the Wild award for April.

Hilbert participates in basketball and baseball for the Bulldogs, but his passion is the outdoors.

“There is just something about being outdoors that makes you not worry about anything,” Hilbert said. “Hearing all the wildlife and nature is so peaceful.”

While sports at Bennington are seasonal, Hilbert is an outdoorsman year-round.

“I would definitely say that fishing and hunting are a year-round thing for my family and me,” Hilbert said. “When one season is over it is on to the next one.”

Hilbert began having an interest in the outdoors at a young age, thanks mostly to his father.

“My father was the one that introduced me to guns and the outdoors at a very young age,” Hilbert said. “I think I was 7 the first time I shot a deer. He always made it a fun thing to do with no pressure so it was always a good bonding time for him and me.”

Besides sports, Hilbert also participates in F.F.A., S.A.F.E. and Mentor Magic at Bennington.

Next year, he plans on going to Technical School in Hays.

“I will be attending North Central Kansas Tech in Hays,” Hilbert said. “I am going to get my degree in HVAC and Electrical.”