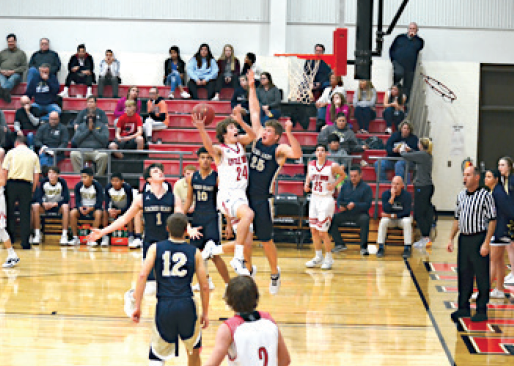 Jayden Garrison of Little River was selected as the Salina-area Hog Wild Athlete of the Month for his performance against Goessel on February 7th. With the top seed in regionals and the outright league title on the line, Garrison poured in 29 points on 47 percent shooting. He made three three-point shots and made 8-of-10 free throws as the Redskins defeated Goessel 58-40.

“We got it going early and took it to them,” Garrison said. “We scored some easy baskets early with our press and that let things come more easily. We wanted that one seed and to win our league.”

Scoring is something that has always come easily for Garrison, who is averaging 22.7 points per game this season on 51 percent shooting, which is particularly impressive for a 6-1 point guard.

“God has given me a talent and I am really thankful for that,” Garrison said.

“But a lot of the credit goes to my teammates who always seem to find me when I am hot.” Garrison is just a junior, so he has not thought too much about his collegiate career. While he is also a standout running back in football, Garrison would like to play basketball at the next level.