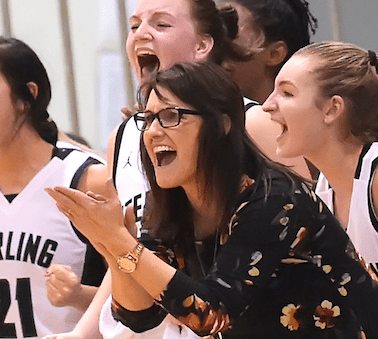 Sterling girls basketball coach Jill Rowland was selected as the Salina-area Coach of the Month for February.

“Basketball is important to the community of Sterling,” Rowland said. “We’ve had some really good players at Sterling. It’s a fun place to coach. I feel blessed to have spent my head coaching career at Sterling.”

From 2011-2019, Rowland led the Black Bears to a record of 152-35, with three state tournament appearances, including a runner-up finish last season at the Class 3A Tournament.

“Team over self is one of the things we preach in our program,” Rowland said. “We say to sacrifice personal things for the betterment of the team. These are just a couple of principles our program lives by.”

Earlier this season, Rowland won her 200th game when Sterling defeated Cheney 46-43 in overtime. For the season, the Black Bears, which are 9-2 and ranked No. 2 in Class 2A. Their only loss came to Central Plains, which is the top-ranked team in Class 1A.

“I didn’t know it at the time,” Rowland said of the 200th win. “But it was a nice surprise to be recognized.”

Coaching basketball has been a family affair for Rowland, who has coached her two older daughters, Alley and Grace, and is coaching Kate, a freshman, now. The Rowland family has invested so much of their life in Sterling girls basketball.

“When my kids were little they were managers, they were gym rats,” Rowland said. “It just became what we did. I always felt like I was supported to coach.”