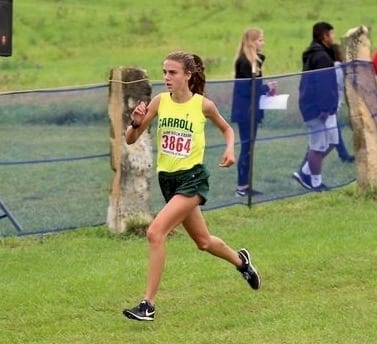 The award, which recognizes not only outstanding athletic excellence, but also high standards of academic achievement and exemplary character demonstrated on and off the field, distinguishes Jackson as Kansas’s best high school girls cross country runner. Now a finalist for the prestigious Gatorade National Girls Cross Country Runner of the Year award to be announced in February, Jackson joins an elite alumni association of past state award-winners in 12 sports, including Lukas Verzbicas (2010-11,

The 5-foot-6 sophomore distance talent won the KSHSAA Cross Country Championships Class 5A state title this past season, breaking the tape in 18:17.90—30.2 seconds ahead of her next-closest competitor—and leading the Golden Eagles to a fifth-place finish as a team. She won all seven races she ran last fall, including the Rim Rock Classic Varsity Gold Race with a time of 18:31.40, and she owns the fastest girls 5K clocking in school history in addition to five of the top 10.

A Sophomore Leader at Bishop Carroll, Jackson has volunteered locally at a homeless shelter and on behalf of the Saint Elizabeth Ann Seton Catholic Church, where she has served as a teacher’s assistant and a Master Server during mass. She has also donated her time to the Prairie Fire Marathon in Wichita. “Hope is incredibly humble, yet driven,” said Cory Swords, the Golden Eagles’ head coach. “Her attention to detail and adherence to our teams’ principle of doing things right all the time has made her a model and a leader for every athlete on her team, both male and female. Her tireless work effort, commitment to excellence, and willingness to endure the discipline and pain tolerance involved in pursuing excellence in her sport is a testament to her extraordinary character as an athlete and person. I can’t think of an athlete who I have had the pleasure of coaching over the last 20 years who has been more deserving of this award.”

Jackson has maintained a 4.17 weighted GPA in the classroom. She will begin her junior year of high school this fall.

As a part of Gatorade’s cause marketing platform “Play it Forward,” Jackson has the opportunity to award a $1,000 grant to a local or national youth sports organization of her choosing. She is also eligible to submit an essay to win one of twelve $10,000 spotlight grants for the organization of choice, which will be announced throughout the year.

Since the program’s inception in 1985, Gatorade Player of the Year award recipients have won hundreds of professional and college championships, and many have also turned into pillars in their communities, becoming coaches, business owners and educators.

To learn more about the Gatorade Player of the Year program, check out past winners or to nominate student-athletes, visit www.Gatorade.com/POY, on Facebook at www.facebook.com/GatoradePOY or follow us on Twitter at www.twitter.com/Gatorade.