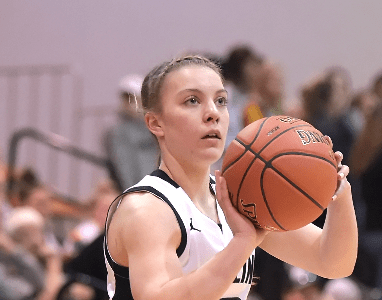 It’s probably never happened in the history of sports, when a team goes into the season hoping to finish in second place. Not that there’s anything wrong with a silver medal, or a state runner-up trophy. But when you’re that close to the title, a chance at immortality, to be forever remembered as a champion, it can, and often does, sting for a while.

The Sterling girls were painstakingly close last season. A squad that showed steady improvement from late November to March, the Black Bears played for the Class 2A state title last season in Hays, falling 47-40 to Garden Plain.

“I’m more of a process coach. I just want us to get better every day,” Sterling coach Jill Rowland said. “We were able to do that so well last year. We lost a couple games early on, and then had a 17-game win streak. We just continued to get better, and that’s the good of it I guess.”

That ending was tough, but it could also prove to be a valuable asset for this year’s team.

Comley, who averaged more than 10 points and right at 4.5 rebounds a game, is one of three starters back. Sterling also returns junior forward Kayla Morris, a talented athlete who is a matchup problem due to her speed and length, and guard Kali Briar. Briar and Morris combined to average more than 15 points a game.

Sterling has much more back, including six letterwinners. Kidist Wilson, Mckenna Linden, Bennie Horsch and Sadie Beagley averaged all more than 4.1 points a game.

“At one point last year, we had nine different leading scorers,” Rowland said. “I don’t think we’ve had many teams this deep. Last year, we just didn’t have enough minutes to go around. You want to give kids opportunities. We got up and down the floor, and that gave kids some opportunities.”

Depth, experience and talent. A pretty good recipe for a hungry team looking for another deep March run.

“I think we have expectations, but I don’t think we’ll put a ton of pressure on ourselves,” Comley said.