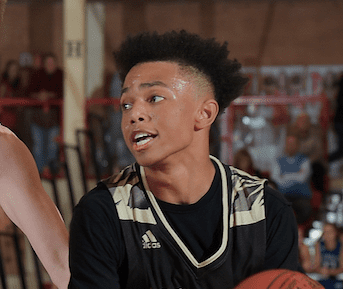 Rap battles…. That’s what Andover Central senior Jerome Washington remembers from the Jaguars’ Class 5A boys basketball championship season in 2019. And not very good rap battles at that, according to Washington.  But it wasn’t the play on words or jokes that Washington referenced with those rap battles. Nah, it was the connection with his teammates.

“Before every game, we’re cracking jokes, taking our minds off the game, building that team bond even when we are going out to compete,” senior Xavier Bell said. There’s a bond with these Jaguars that transcends usual levels. It’s a bond that has been years in the making.

Seven of the team’s nine seniors went to Andover’s Sunflower Elementary.  “Five or six kids on our team played for my dad when we were in elementary school,” said senior Ty Herrmann, who is coach Jesse Herrmann’s son. “Now we’re seniors in high school. It is special.”

Jesse Herrmann agreed. “I’ve known these boys since they were little,” he said. “They’re a group that probably ticked off elementary school teachers because they’re so competitive. If they want to be on the team, they’re going to make us better in practice, whether they’re getting minutes on Friday or Tuesday.  “They’ve just always wanted to win, and I’ve known them so long that I have this insight that I normally don’t have.”

Even when Herrmann coached them at the Andover Rec, they all wanted to win.

He has watched many of the players also find success on the football field, including Ty, Bell, Shomari Parnell, Trey Degarmo and Jake Taylor. “You get to know your players over the years,” Herrmann said. “But they’re friends with my son, I know their parents better. Hopefully that will be a positive for us. I know that last year I thought it was. I could understand them better and they could respond to me.”

In March, Andover Central won its first state title.  Most of that team returned. “We’re more experienced and we have great chemistry,” Bell said.

Andover Central lost a lot of offense in the graduation of Easton Leedom and Braden Belt, but the Jaguars will cause matchup problems that will help offensively. “I think our biggest strength is we don’t have any positions, really,” Ty Herrmann said. “We can guard 1-5s. Jerome (at 6-foot-5) is technically our post, but he can do everything for us.”

Washington was a key in Andover Central beating Maize South in the 5A sub-state championship in March. “He’s able to stretch the floor out, and not many teams have the size that we will have with him down low,” Bell said.

Bell, a four-year starter, is versatile, as well. He can post up or create on the perimeter.  “He’s an amazing offensive player,” said Washington, who also started as a freshman before getting hurt. “He can get whatever he wants. He isn’t afraid to do what he does, and he’s strong on offense and defense.”

Ty Herrmann is another outstanding defensive player. “He knows what you’re going to do before you know it,” Washington said. “He’ll be there when you’re moving to that spot.”

Parnell, who played varsity only as a sophomore, also causes problems with his defense and his ability to create havoc. He’s fast and athletic, and after missing most of his junior season due to an injury suffered during football, he’ll be even more energized on the court. “He can start and stop so fast,” Jesse Herrmann said. “He’s got savvy to where he can make a play on defense, and a lot of times he’s just quicker than the people he’s guarding. He can play smart, too.”

Kaden Wilson will be critical offensively. He can score from the perimeter or drive inside.  “Kaden can shoot the ball really, really good,” Bell said. “He’s going to be my Braden Belt this year as far as three-point knockdowns. He’s not afraid to drive it in and take contact, either.”

Matt Macy, Brigdon Stupka, Degarmo and Taylor will also play key roles, along with junior Matt Sears and sophomore Skyler Clevenger.  But whoever is on the court, they know they can count on one thing — they’ll be having fun. “We’re having the time of our lives out there,” Ty Herrmann said. “We’re playing with our best friends out there.”