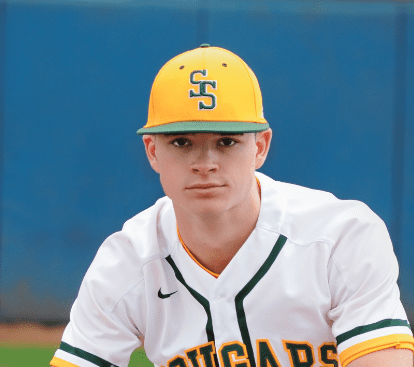 Being successful in business requires knowledge and preparedness. The same goes for athletics. You have to know the game and practice so you are prepared to play. Salina South’s Jonas Baughman knows what it takes to be a success on the diamond.

“I always strive to be successful in baseball,” he said. “It takes a lot of offseason work along with doing conditioning and weights.”

Baughman, who is a senior, plays catcher for the Cougars. He has been playing the sport for as long as he can remember.

“I started playing baseball ever since I could pick up a ball,” he said. “I loved baseball before I played t-ball.”

He is excited about entering this season, most of all because of the success his team had last season.

“Last season, was one I’ll never forget,” he stated. “We won our regionals against Goddard and fought hard at state. The team last year put everything we had on that field.”

The biggest moment of Baughman’s career came during a playoff game in baseball.

“I put down a tag at home plate against Maize to put us in extra innings in our opening game at Regionals.”

Jonas’ role model for his life is someone that he is close to and has helped him become who he is today.

“My dad is definitely a huge influence on my life,” he said. “He pushes me and puts in extra time to make me not only a better player, but also a better person and leader on and off the field.”

In the classroom, one of Jonas’ teachers have taught him lessons that will stay with him for life.

“Mrs. Cairns would have to be my favorite teacher,” he said. “She has taught me that in order to be successful, you have to put in the extra hours. All the hard work will pay off.”

Away from athletics, Jonas is heavily involved in his church’s youth group. He is also an avid bow hunter and fisherman.