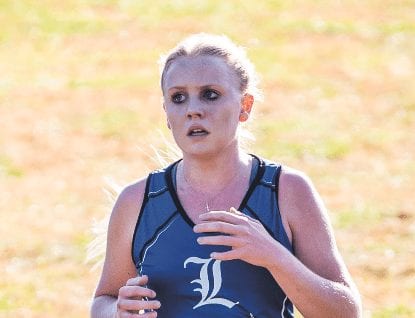 Jaycee Vath, Raegen Stewart and Shelbie Ford spent parts of their summer working to recruit classmates to come out for the cross country team. The trio hope to defend their Class 1A team cross country title, but they knew their chance at a repeat would end if they didn’t find at least one more teammate. Teams must have four runners scored to qualify in the team standings.

“It took us a while to get girls to come out,” said Stewart, a sophomore, who finished ninth in 1A last fall. “It’s pretty hard to tell people that running 3.1 miles is fun. They would say they weren’t really sure because they didn’t really like running. Or, they were not sure if they could make it that far.”

But the champs found two new teammates – senior Kaile Young and sophomore Alex Biggs – and are a favorite to win 1A again. Vath, a junior, won individually in 19 minutes, 47.7 seconds. She was second in Class 2A as a freshman. Ford took eighth in 2018, while Aubry Donley, who finished second, graduated. It took Vath until the summer before high school to realize she enjoyed running.

“In seventh grade, it was only a mile, but I also played volleyball,” she said. “I picked cross country as my main sport that year. But in eighth grade, when it was (a two-mile race), I didn’t want to do it at all. My mom forced me to do it. So I picked volleyball as my main sport so I didn’t have to go to all the meets.”

“It’s one of those things,” Lincoln coach Steve Crist said. “Just like the jump from a mile to two miles in junior high … I’ve had a harder time to get them to run the 5k compared to the 4k. It’s scary to them. We’ve had a struggle.”

Vath is highly competitive, though, so at meets her goal was always to win.

Her goal this season is to win individually and as a team, but also to improve her time.

“I didn’t PR last year,” Vath said of failing to set a personal record as a sophomore. “My best time is a 19:22 my freshman year…. I was within two seconds of it (last year), so it wasn’t like I was too far off. But my other meets weren’t better. I want to break 19 (minutes) this year. That’s what I’ve been working for. It’s what I wanted last year.”

Vath didn’t do summer track but trained by running longer distances and doing intervals. Stewart found her passion for running in sixth grade when she did a color run. At times she runs with her mom, Holli, who ran at Sylvan.

“If you’re having problems or a mental block or something, she can help talk you through it and give you pointers on how to improve yourself,” Stewart said. “Cross country is definitely on the mental side. It’s on the physical side, too, but you have to be mentally in it, mentally able to push through to get to the finish line.”

Ford joined the team after Crist’s wife, Mandi, talked to her parents after seeing Ford run in a track meet.

“Mr. Crist and his wife convinced my parents to let me do it,” Ford said. “I was excited but nervous at the same time because I had never really ran long distance. It felt like I was being drained of energy, but once I crossed the finish line, I was so excited about being part of an amazing team.”

Each athlete described their team as so much more.

“I know how hard each of them has worked and how great they did,” Vath said. “Sharing that experience with them was a thrill. We got so close. It was legit like a family.”

They plan to keep that tight bond this fall.

“I’m super excited,” Ford said. “I want to win that state title again. It felt so amazing. We had so many people congratulating us, and we only had four girls while the rest had 10 or more. It felt really amazing.”

Crist is confident his team can repeat because of their focus on that title.

“These three girls are really competitive and they’re mentally tough — that makes such good cross country runners,” he said.